The inspiration for the Bike & Hike for ALS: Lester M. Vahsholtz 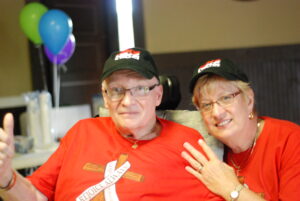 Les Vahsholtz, was diagnosed with ALS in of January 2012.  He, and his family, were just beginning to learn about this rehabilitating disease.  At the time, Les mentioned that he wanted to do everything he could to document his ALS, participate in clinical studies as he could, and take as many of his planned retirement trips with his wife, Carole, as he could.

Les’s son Tim wasn’t sure exactly how, but he wanted to do something different to bring awareness to the community about ALS, and honor his Dad at the same time.

Tim says, “I remember, when I was growing up, how my Dad, my sister, and I would always ride our bicycles after dinner.  I have always been into cycling since then, and my Dad started riding again a few years ago on one of my Orbea bicycles.  It is because of our enthusiasm for cycling, and Dad’s enjoyment of the sport, that I wanted to do this event in his honor and memory.

That first year, it rained.  And rained.  Still, over 75 people took up the challenge and, since there was

just rain, no lightning, the event went on as scheduled.  Proceeds went to the ALS Association of Arkansas, and an increase of awareness of Lou Gehrig’s disease was achieved through a unique dual-sport event.  While Les was confined to his motorized wheelchair by that September 2012 day, and was unable to talk, he participated in the event as the first Official Event Starter, blowing the horn to start the ride.

Les fought a short battle with ALS, just 11 months.  He passed away in December of 2012, but the Bike & Hike Challenge for ALS continues his mission of creating awareness and giving support and comfort to those fighting this disease, and to those working to find a cure.